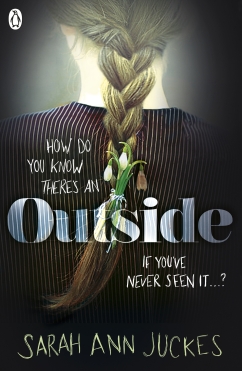 How to be an outside person, number one – Go outside

Going outside seems simple right?  Just as telling you about this book should also be simple, but it’s not, I barely know where to start.  How do I tell you that this book is disturbing but redeeming, which is why I couldn’t put it down and why I want others to read it.

It had me on edge the whole time, I was confused and even frustrated, the solutions seemed so simple but they weren’t.  My heart ached, I wanted Ele to be safe, to be free, to understand what the Outside is.  I wanted clarity and trees…lots of them to breathe life into Ele, for Jack to be real, to know truth and the difference between imagination borne to create a safe zone and truth.

I wanted my mind to stop wondering, and for my eyes to keep reading so that I could get to the end. This book is not at all simple, it’s complex and intense and it will leave a lasting impacting on you.

How to be an outside person, number two – Be brave

If there is one thing about this book that comes out strongly is Bravery.  The resilience and strength of Ele made me think that anything is possible, that with enough determination that anyone can overcome adversity.

For Ele to even contemplate leaving her “Safe” place and not understanding the world around her is very telling of the characteristics of her character. I felt the author had a very intimate understanding of Ele and was able to develop her character into someone that people would look up to, particularly when she demonstrated the courage it takes to live in a world that neither you or anyone else can understand.

How to be an outside person, number three – Never think about the inside

While Ele does everything to avoid thinking about the Inside, when she does confront it the story takes a turn that I was hoping would come at the very beginning.  I never imagined it would play out the way that it did though but appreciated the element of surprise.

August and his father were one of the main sources of my frustrations in the book, I found it hard to believe that they wouldn’t contact any authorities.  However, reaching the end of the book I appreciated the integral part they played in the story for both themselves and Ele.

The author has bravely written about captivity, abuse and mental illness – like I have said previously the book is intense but I believe stories like this have a place.  They open doors for communication, for people who feel alone in their sufferings to understand that others go through these things.

It is very hard to recommend an age for this book because the content is quite mature and as an adult, I found it quite confronting.  However, this book is also telling a story that might be pertinent to the survival and mental health of a teenage person.  My recommendation would be to whoever decides to read it to also talk about it, help people understand they aren’t alone and to show that once your Outside anything is possible.

Thank you Penguin Books for the opportunity to read and honestly review this book.

Image is courtesy of Penguin Books.