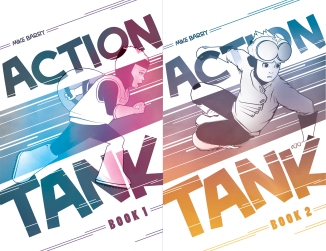 Mikes Graphic Novels, Action Tank 1 & 2 have been created with 8-12-year-olds in mind and these action-packed and humourous reads will encourage even the most reluctant readers to be engaged in them.

Action Tank 2 is Mikes latest graphic novel and second in the Action Tank series. This clever story is about a boy and his friends who race across the Solar System in a beat-up spaceship called The Verity. When he is forced to land, he is instantly under attack from lightning cannons, racing hovercrafts and trying to outsmart bucket headed guys. His ultimate goal is to make it back home for his mum’s famous spaghetti carbonara.

This action tank series is an adventurous tale of discovery, learning what you are capable of, friendship and leaves you on a cliff hanger…

It is visually engaging and uses really nice hues of blue, grey, purple, yellow and red throughout the book. It is easy to read and will interest both children and adults, Mike has been really mindful to make sure that it is appropriate for the ages it is aimed at.  Simply, it is a fun graphic novel that is safe for young readers. 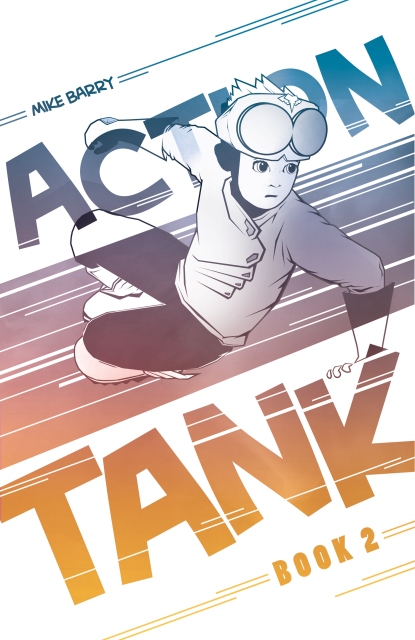 I love when a book is created from something special, from a need that was seen. When I recently got to talk to author/illustrator from Sydney, Mike Barry about his graphic novel Action Tank – Book 1 and 2; I was really moved by why it came to fruition.

Apart from being a fun story for kids, I love that this series was created with the love of his own children in mind. These graphic novels were born from Mike wanting to share his love of comics and graphic novels with his boys but struggled to find anything appropriate for their age or reading level. Mike also answers some of my question’s about his graphic novel journey.

Why did you decide to do a Kickstarter?

“I’d always wanted to make a graphic novel, and I’d always wanted to run a Kickstarter, so it was exciting (and very satisfying) to be able to wrap those two experiences together when I created the first Action Tank book. Kickstarter is powerful for many reasons, but a big one is that it is effectively a market test – if you have a product people want, they will back it and help you bring it to life. The success of the Kickstarter campaign for Action Tank 1 gave me confidence in the book I’d created, but it also gave me a way to build a community around my book before I’d even printed it. So then, by the time that community actually received the book, they were not only excited and supportive, they also very invested in my success. When the time came to produce Book 2, I was then able to leverage the direct relationship I had with that audience to run another Kickstarter campaign. It had a bigger funding goal, and I have to admit it was a lot more work than the first one, but it’s been thrilling to get Action Tank Book 2 completed, and out into the hands of so many young (and in many cases not so young) readers.”

Do you have resources for teachers?

“I sure do. I put together a discussion guide that goes along with AT2, which you can find at actiontankcomic.com. I also do school visits where I run comic-making workshops for years 3-6, usually when a teacher or librarian invites me… so I guess technically I’m a resource for teachers too.” 🙂

Where can we get your book from?

“You can order it directly from me (and I’ll sign it for you) through my online store at actiontankcomic.com. You can also find the Action Tank series in some of Australia’s finest bookstores and comic shops. There’s a list of stockists on my website. If your store doesn’t have it, ask them to get it” 🙂

Will we see more from the Action Tank series?

“What kind of sadistic author would I be if I just left the epic cliffhanger at the end of Action Tank 2 dangling forever? I’m currently hard at work mapping out the conclusion to the story, so I can say that YES there will be at least one more book in the series.”

Thank you, Mike, for sharing your graphic novels with us and we look forward to more from Action Tank!