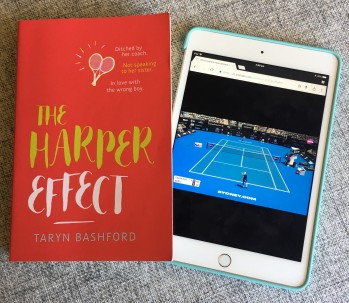 When one takes a week off to watch tennis they also take the time to read a novel about tennis of course.  Well The Harper Effect isn’t just about tennis, it explores family dynamics, friendship, dreams, ambition, determination and love.

The first draft of the The Harper Effect was written under a completely different title when Taryn Bashford was just 14 years old.  It evolved overtime and is now Taryn’s debut novel; an easy to read book that grabs your attention right from the start.

The Harper Effect begins with Harper Hunter being dumped by her Tennis coach who no longer believes that Harper has the drive or the talent after a long losing streak.  This book is set in the world of international tennis and how Harper follows her dream regardless of the high’s and lows that come with the demands of playing tennis and being a teenager.  Harper not only faces her biggest tests on the court, but navigates the confusion of love and friendship, the breakdown of relationships that are most important to her, and being a strong, confident women who believes in her own ability.

Throughout the novel we see Harper Hunter grow in self belief, unleash her talent,  become determined and matured through experience, but not before making choices that cause a fracture in the relationship with her sister Aria.  Harper’s go to place both physically and mentally – purple time, Teenagers/young adults will be understand as their place of sanctuary, somewhere to retreat.  For them it might be a library, their bedroom, a grassy field or getting lost in their music. Most, if not all teenagers can relate to that special place that motivates them or allows them to escape. I think purple time was pertinent to the story as it’s a transforming element for Harper.

I didn’t like Jacob from the outset because his personality grated on me a little, however I understand that he is who he is because of his family life or should that be lack of it.  Under different circumstances I feel as though he would be a much more likable character and more grounded as a person.  However, his unlikable traits are essential to the story line and shine a little light on the complexities of the teenage life of a boy.

I was frustrated at times with Colt and his moods, and they way he just shuts off.  However, like Jacob, once you get to know his background you can understand why he is like he is.  Many of us would be guarded by less things in life.  The one trait that I feel makes Colt’s character was his loyalty to his family no matter what was thrown at him.

Even though I really felt like I got a strong sense of each of the characters, I never really felt that we got to know Harper’s sister Aria.  We get snippets of her and how she feels some of the time, but when I got to the end of the book I really didn’t feel like I knew her.

I think Taryn has successfully shown that sometimes we win and sometimes we lose.  Sometimes we reach for the mountains and we only make it halfway, but our attitude and feelings of happiness and contentment is what makes us winners in life.  Overall, I enjoyed this book and there are many elements that keep you engrossed, wondering where Harper will go and how will she achieve her dreams. Do you need a tennis fix? Like reading a book that is constantly keeping you guessing?  Then be sure to pick up The Harper Effect, I would love to hear what you think of it too.

Thank you to Pan MacMillan for the opportunity to read and review this book.