It was my first time reading a Diary of a Wimpy Kid book, I was so engrossed I read it within an hour.  When I closed the book I declared that Jeff Kinney is the first person to get me to enjoy disastrous comedy, he is the Master of Disaster with a whole lot of laughter thrown in.  Truth be told I normally avoid books where things go wrong all the time, however The Getaway was so funny, engaging and disaster filled that I couldn’t help but love it.

For my first Wimpy Kid book experience the Heffley family take their Christmas holiday break to sunny Isla de Corales. Greg was reluctant to go at first, and while I don’t want to give too much away, I can tell you that the Getaway is exactly as Greg and you would expect.  It was all a little crazy and things going wrong at every corner, even before the Kinney’s got on the plane. I know I would have wanted to turn back and not go on that trip (just like Greg), but I am glad the Kinney’s did.  Just imagine everything that can go wrong when you go on a trip, squishy economy seats, being the cause of a pool being emptied, creatures wherever you eat and the spider that just keeps appearing…and this is only the beginning of things for the Kinney family because it gets much worse, in a rather funny sort of way.

I can understand why the Wimpy Kid books are so popular and love that such a variety of ages read them, from tweens to teenagers (and the odd adult like me).  The words are easy and engaging, the illustrations funny and add depth to the book.  Additionally, the text that looks like handwriting on the lined paper makes the book authentically feel like a diary.  But what I think makes Jeff Kinney’s The Getaway appealing to me and why the series is so successful, is that it appeals to an age group where boys often stop reading or find it a challenge to read.  Now, I am not saying this book is just for boys, it is for all genders, but in my experience the balance between text and pictures that has been seamlessly put together appeals considerably to tween and teenage boys, including those who need encouragement to read.

Some of my favourite lines in the book include:

I didn’t notice until I got to the end of the book that there are no chapters as such, although the headings for the days of the week are good starting and stopping points. Depending on who is reading the book this may be a good or a bad thing, for me it was good because I had time to read it in one go, however it may be harder for those reading it who like to read a chapter or two a night. 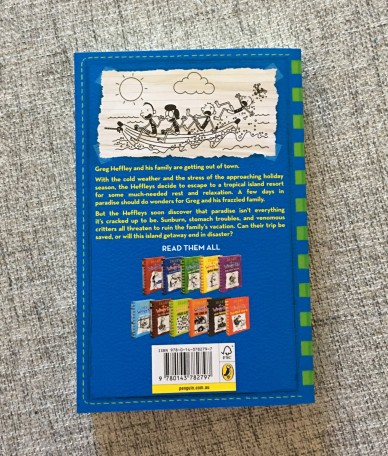 Have you read them all?

You can probably tell I love this book a lot, I am so glad I finally have been introduced to the Diary of a Wimpy kid books.  If they are all like The Getaway then it makes for a quality series.  I highly recommend this book for all children, whether they read it themselves or have it read to them, Jeff Kinney has the gift of drawing the reader into the written word no matter what their age or ability is.

Thank you to Penguin Books Australia for the opportunity to read and honestly review this book.